My new solo/collaborative project is the Eje (Eh-Heh) which means axis, hub and "aha!" in Spanish. The Eje's actual materials are made up of instruments from many parts of the world such as the Dominican tambora, the Cuban conga, the Turkish cymbal, and the African Canzoo as well as a Guibasso, which is a hybrid guitar that has three bass strings and three guitar strings. All of the components sit on a moving kinetic sculpture stage which marks a constantly shifting territory. The instruments themselves have their own histories and cultural backgrounds. Although the Eje is not restricted as to what music can be played on it in this configuration it is set up to play Puerto Rican and Cuban rhythms. 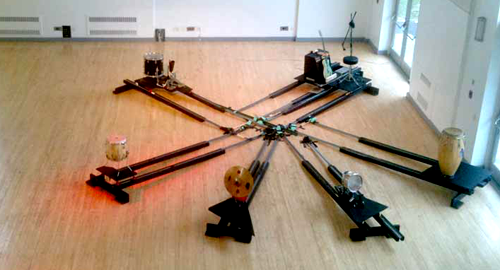 Although the Eje can easily be looked upon as a "one man band" I am not interested in the carnivalesque or novelty of solo playing all of these instruments at once. Rather I view the Eje as a soloist playing ensemble music. In other words I am interested in exploring my own history of playing in ensembles through attempting to experience the space between musicians that is created as a collective whole. In the Eje the experience is then transferred in the space, not only between my body but the new spaces created in my mind. I view playing ensemble music solo, as a recorded memory that is being compressed into a different format, alluding to recorded media and its histories of compression. What is lost? What is mutated? Eje as ipod.

Since the creation of the Eje many questions have surfaced. Is it possible to not be the center and play as a soloist? How does my experience of playing in ensembles get recorded in my mind and body’s memory? Is it possible to remember a collective musical memory outside of my own? The musics that are influencing my memory, although considered at their inception to be subversive and revolutionary, are all male dominated. How can I deal with a mesgonist history through my Eje? How have modernist and post-modernist terms such as "the new" and "interesting" as well as "complex" changed? How can I in a more complex way deal with the image, sterotypes and expectations of "the Latin male"?

Eje #6 from Abraham Gomez-Delgado on Vimeo.